For those who don’t know, Justin Bieber’s fans are known as “Beliebers.” Well. it’s not all good news for them! New research from the University of New York has found that primates have zero appreciation for music. This came in as a shock as past studies had suggested that chimps actually enjoyed slow music because it was relaxing.

Researchers from the University of New York found that music has no effect on their behavior. Humans are the only species to have evolved an appreciation of music. Their findings were published Wednesday in PLOS one.

The research team played a selection of music, ranging from Adele, Beethoven and Justin Bieber. While nothing seemed to happen when the slower music of Mozart and Beethoven was played, once Justin Bieber’s music started to play, things changed dramatically.

The following report will tell you all about it! 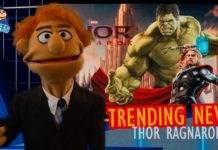 ABOUT US
Puppets on Fire's mission is to provide funny puppet videos for entertainment as well as create custom puppet video productions for individuals, educational facilities and businesses of all kinds and sizes to enable them to get their message out there, without breaking their bank.
Contact us: [email protected]
FOLLOW US
© © Copyright 2017 - Julio Foppoli - All Rights Reserved